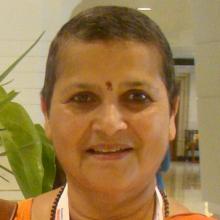 She is an Advaita Vedantin and Vedic and Sanskrit Scholar (holding a Ph.D. in Sanskrit). Her other areas of study and research are: Vedic Studies, Temple-Architecture, Buddhism, Bhakti and Sufi Movement in India. (Her other technical degrees are MBA (in Finance and Marketing), and PG Diploma in Journalism, Certificate in Human Rights, which she earned in per previous āshrama).

Although a consummate Advaitin, she handles effortlessly other philosophies. Her expertise lies in disseminating Advaita Vedanta, demystifying it and presenting it to the students/readers as a Pramāna (a valid means of knowledge). Her decades of gurukula-studies and University education (M.A. and Ph.D.) and past corporate work-experience makes her relate to her students/readers. She handles her contenders in Vishishtādvaita, Dvaita, Atheists, Iconoclasts, Christians, Islamic scholars with ease and respect, and wins them over with her intellectual honesty without imposing her views on anyone, winning them over, in the process gathering additional knowledge to her corpus.

Her translation of around 30 popular Vedic Hymns (Suktas) and Sanskrit Stotras are in the You Tube, freely available to all interested seekers.

Swāmini is a Krshna-Yajurvedi Taittiriya-Shākhādhyāyi. Vedic chants are included in the UNESCO Lists of Intangible Cultural Heritage. Her Vedic/Sanskrit chants comprising 8 ½ hours are available in the You Tube along with selected images of paintings and sculptures duly captioned, and elaborate script. Her Channel has more than 211,000 views as on date, and more than 600 subscribers.

Swāmini is the Founder Ācāryā of Ārsha Vidyā Vikās Kendra, a Teaching and Research Centre for Vedānta, Sanskrit, and Indian Culture. Swāmini has taught Vedanta and Sanskrit to many eligible students in short-term courses in Bhubaneswar as well as in Rishikesh.

In addition to her teaching and research activities, she has convened five National Conferences in 2009, 2010, 2011, 2013, 2014 (2) on Indological topics. She has been a delegate and signatory in many National Inter-faith and Intra-faith Meetings.

Swamini was a delegate and signatory in A Meeting of Diverse Spiritual Traditions in India convened by The Office of His Holiness The Dalai Lama.

Parivarajanam and Temple Visits: Swāmini has visited (by flight, train, car, on mules, on foot) more than 100 temples/holy sites in India, has extensively photographed them, and has studied their legends, architectural history. They include 4 temples of elements, 5 Jyotirlingas, almost all Buddhist and Jain Pilgrim sites, and all famous Indo-Islamic architecture. Out of these, 12 are listed as UNESCO World Heritage Sites.

Her collection of photographs of paintings and sculptures, supplemented by her own, are extensively used in her You Tube Channel, and her Blog (her own photographs). Her photographs of Mahabalipuram, Ajanta and Ellora have been selected by BBC for their documentary work.