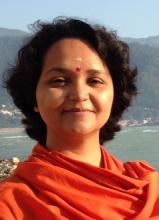 Swamini Brahmaprajnananda Saraswati has teaching programs of Vedanta, Sanskrit and Vedic chanting for different groups in Mumbai, India and for people online, across the world. Recognising the need for immersive learning, Swamini-ji also co-conducts Vedanta retreats in different parts of India and Brazil. Depending on the need she conducts talks, workshops and learning sessions for different groups.

In her words, 3Gs have dominated my  life – 'Guru, Grace and Gratitude.’ She sees her life and the many activities she is involved in, to be an offering to her gurus and the rishis.

She is the first Hindu monk to run an online course on the ‘joy and wisdom of dharma’ on Udemy, the online learning platform.

Responding to the needs of many parents, she conducted a programme called SHINE ( Spiritual Heritage of India for Generation Next Empowerment) which included sessions for children spread over a year.

Swamini is an alumni of the international fellowship programme 2016 at KAICIID, Vienna, a centre for inter religious and inter cultural dialogue.

She ran a leadership programme with a focus on conflict resolution and inter religious coexistence called ‘I am the change’ for college youth in collaboration with SIES college, Sion.

Swamini continues to serve as the Visiting faculty of SNDT University, Department of Psychology for more than 14 years and continues to teach the MA students the paper on Counselling and Therapy.

Swamini has been involved with contributing to revival of Indian thought in psychology and has presented a few papers in conferences on Indian psychology in the past and her most recent presentation in Delhi in March 2018 was titled, 'Indian psychology is incomplete without Dharma and Ishvara'.

A chance attending of a workshop by Swami Brahmavidananda led her to attend his Vedanta classes in Mumbai alongside work  for more than twelve years, which was pure grace. In this duration, also being exposed to Pujya Swami Dayananda Saraswati ji through his retreats, meetings and camps firmed up her resolve in committing to full time study and when the opportunity presented itself to study directly with him, it proved to be the greatest blessing.

Prior to taking to a life in the ashram for full time study and subsequent sannyasa deeksha by Pujya Swami Dayananda ji, she was academically trained as a psychologist and counsellor. She worked professionally in many capacities for fifteen years. The last position she held was as the country head of the India programme for an international organisation impacting the lives of 15000 street children in India annually. Pujya Swami would often tell her, during those years, 'Your seva is very dear to my heart'.