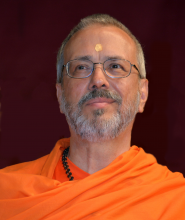 Swami Advayatmananda was born in 1958 in San Diego, California, USA.  Initiated into meditation and embracing vegetarianism in his early teens, he expressed deep spiritual interests throughout his early years, exploring many spiritual teachers and traditions, regularly attending spiritual, philosophical and devotional groups in the area.

At the age of 19 he journeyed to India only to return several months later disillusioned with the questionable gurus, belief systems, and lack of spiritual discernment he found there.  Returning with only the conviction in the efficacy of meditation, the profundity of the meaning of Om, and the necessity of studying the primary texts, the ancient scriptures of India in the original Sanskrit, he pursued a Bachelors degree in World Religious Studies and Sanskrit from the University of California.

While finishing his degree in 1981 he went to hear a Swami who had come to speak on campus and was stunned by the depth and clarity of the presentation.  The vision of the ancient sages, which had until then been primarily inspirational and aspirational for him, was presented with astonishing clarity, not as a theoretical map detailing a path to tread, a belief system to swallow, or a mystical experience to pursue, but as direct knowledge of immanent and immediately accessible truth which is not separate from oneself.  With this one lecture he knew he had found his guru in this extraordinary teacher, Pujya Swami Dayananda Saraswati.

He continued his Vedanta and Sanskrit studies for several years with Radha (Dr. Carol Whitfield), a senior disciple of Pujya Swamiji’s, while working as teacher and program manager for a school for developmentally disabled adults.  In early 1986 he moved to Saylorsburg, PA, USA, the future site of the Arsha Vidya Gurukulam, to help with the construction necessary to prepare the facility.

From January 1987 through December 1989 he attended the full-time 3-year residential course for the traditional study of Advaita Vedanta, Sanskrit, meditation and yoga taught by Pujya Swamiji.  The curriculum included intensive study in the original Sanskrit of the Upaniṣads, the Bhagavad Gītā, Brahma Sūtra, all with Ādi Śaṇkarācārya’s traditional Sanskrit commentaries, along with a number of other Vedanta texts (prakāraṇagrantha-s), and the Sanskrit grammar of Pāṇini.  During the course he was given the name Daksha by Pujya Swamiji, and continued his guru-sevā, contributing to the ongoing construction of the gurukulam.

After the course he pursued a Master’s degree in Computer Information Systems and worked at a Silicon Valley based international high-tech company as a software development manager for a number of years.  In 2010 he quit his job, sold his house, and returned to India for a year of further study with Swami Dayananda.  In 2012 he was given brahmacarya-dīkṣā, and on March 22, 2015 in Rishikesh he was given saṃnyāsa-dīkṣā by Pujya Swamiji – initiation into the Daśanāmī monastic order.  He was given the name Swami Advayatmananda Saraswati -“One who finds his joy and completeness in the truth of the non-dual self from which nothing is separate.”.  He had come home.

Over the years Swami Advayatmanandaji has shared his knowledge of Vedanta and Sanskrit at each of Pujya Swamiji’s three teaching institutions, as well as in other parts of India and the US.  At the encouragement of Pujya Swamiji, Swami Advayatmananda established Arsha Drishti, an organization dedicated to the traditional teaching of Advaita Vedanta, Sanskrit, and meditation in his home town of San Diego, California where he now resides and teaches.