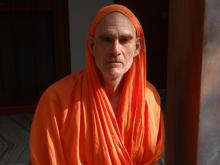 Sri Swami Vagishananda is a senior disciple of Swami Dayananda Saraswati and has been teaching and studying Vedanta philosophy for the past 40 years.

Swamiji was in his teens when he became fascinated with mystical poetry an non dualistic philosophies. In 1975 at the age of 19, he left from the U.S.A to India to study in a traditional Gurukulam. After graduating from a three year residential course of Vedanta and Sanskrit language, he attended the four subsequent three year courses in the United States and India and has continually studied Sanskrit and advanced Vedanta texts.

Swamiji has an immediate rapport with children of all ages, as well as a special gift of being a bridge to help second generation Indian/American youth to see the value of universal values such as non-injury, truthfulness, etc.

Having studied the Krsna Yajur Veda under the Vedic Pandit, Sri Ganapathigal Ravichyandran Aiyar and other teachers over many years he gained mastery of Vedic chanting.

Over the years he has conducted many children's camps, adult seminars, and Vedanta classes in the USA, Canada, UK and Australia.