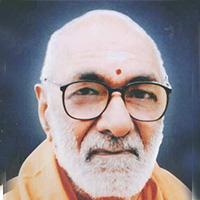 Swami Suddhananda ji has been with Pujya Swami Dayananda ji from 1963 on wards in Rishikesh when Pujya Swami ji started living first in Andhra Ashram and later in a hut on the banks of the Ganga. He is one of the senior most disciples and is a Karma Yogi who dedicated his life to the seva of his Guru.

Pujya Swami Dayananda ji gave the first Sanyasa Diksha to Swami Narayananda ji in 1968. Then the second person to get Sanyasa Diksha from Pujya Swamiji is Swami Suddhananda ji.  He is the force behind Swami Dayananda Ashram in Rishikesh, right from the day it was established in 1969 and one of the main reason why the Ashram is there today in the form it is in. He has been an efficient administrator of the Ashram and is currently the Chairman of Sri Gangadhareswar Trust, under whose auspices the Ashram is being run.

In 1963, when Suddhananda ji was the manager of Andhra Ashram, Pujya Swami Dayanandaji arrived and he was blessed enough to offer accommodation to him who was a brahma-niṣṭhā, fully contented with having the sky for his roof and the quarters for his enclosure. Pujya Swamiji was an epitome of simplicity. His demeanor and deportment unmistakably revealed the innate divinity and glory of a mahātmā. He always sported an enchanting smile. Suddhananda ji's spiritual voyage with Pujya Swamiji, which was to last for many decades, commenced then in right earnest.

When Pujya Swamiji decided to leave the Andhra Ashram and shift his place of stay to the banks of the sacred Ganga, he invited Suddhananda ji to go with him. Suddhananda ji readily acceded and Swami Gopalananda ji also joined him. Sublime memories of his stay with him and willing performance of his daily chores like cooking etc. and taking care of other matters are still green in his mind. In the year 1967, Pujya Swamiji left for the Chinmaya Mission in deference to the instructions of his guru Swami Chinmayanandaji.

This place in Ganga, continued to serve as Pujya Swami ji's accommodation in spite of his inner desire to hand it over to the Chinmaya Mission. Such was the good luck of this place in retaining a mahātmā! Suddhananda ji named the place Swami Dayanandaji Ashram and continued to develop it to its present state.