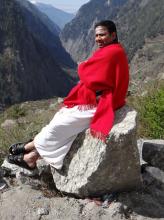 Kalyankumar is an Engineering Graduate from IIT BHU, Varanasi and is currently working in an IT Major at USA. He was keenly interested in spirituality right from his college days. He got introduced to Pujya Swamiji in USA when he attended a weekend camp at Saylorsburg. Since then he has taken Pujya Swamiji as his Guru and later went to Anaikatti in 1995 to study at the three year course, as a residential student.  After the course Kalyan got married to Srividya and has been a teacher of Vedanta for many years at Chennai.

He is a founder member of Aarsha Vidya Varshini trust, which is currently building a Gurukulam at Therku Paappaankulam near Kallidaikurichi in Tirunelveli District in India. Currently Kalyan is conducting Vedanta classes online.