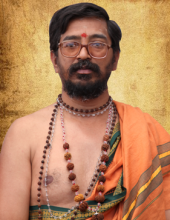 Sri Srinivas Swamiji is a Hindu Teacher, purusing life of Service, Religion and Spirituality with vision of Universal Oneness as per the Advaitic tradition of Upanishads as expounded by Bhagavatpada Sri Adi Shankaracharya and also guiding people in Spiritual, Religious matters and involved in service of society for the betterment of humanity.

He was born and brought up in a traditional Hindu family in Bangalore city.

He had regular studies and did his Electrical Engineering degree in Bangalore University.

Life and teachings of Bhagavan Sri Ramakrishna Paramahamsa and Swami Vivekananada inspired him for life of Service, Religion and Spirituality.

He studied shastras and learnt dhyanam from many Spiritual people, Sannyasis and Scholars in various places.

In Rishikesh, he Studied Shashtras, Sanskrit language, Panini Vyakarana and Shankara bhasyas in Arsha vidya Gurukulam(also known as Swami Dayananda Ashram on the banks of River Ganga) which is founded by world renowned Hindu Religious leader Parama Poojya Sri Swami Dayananda saraswati. Here along with studies he was also actively teaching Sanskrit along with his Sadhana and Seva.

Apart from his Shastra Adhyanam and teaching, he has also spent time in Sadhanas in different parts of our country, Himalayas, also on the banks of river Ganga, Narmada etc.

At present, He is teaching Shastras to all people without any discrimination of caste, Religion, sex etc.to create teachers of shastras, who will bring right understanding of Santana dharma and also bring awareness of noble, all-encompassing universal values viz. Vasudaiva kutumbhukam, all forms of worship leads to the same good etc, of Hindu dharma as given by Vedic Rishis, which alone can save the world.

In this era of globalisation only global citizens of universal values alone can make  universe a better place with more peace and prosperity.

So teaching Shastras, Sadhana and Service to all to create a healthy global citizens and also to Protect, Preserve and Propagate Santana Dharma Hinduism for a better world.