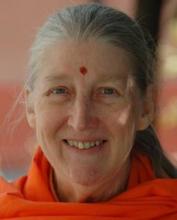 Disciple of Pujya Swami Dayananda Saraswati beginning in California since 1976.

Stayed in India on student visa from 2000-2007 at Anaikatti Coimbatore.