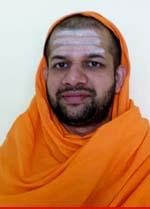 Swami Shivaprakashananda Saraswati was born on 29 April 1981. Even as a child, he exhibited a great inclination to spirituality and practiced disciplines like fasting, sleeping on the floor, japa, meditation etc. He studied Sanskrit with great interest.

On his completion of school education, he pursued a bachelor’s degree in mechanical engineering. Though he completed his engineering education with high grades, he was no longer interested to pursue a secular career in life. He left home at the age of twenty-two in quest of the ultimate truth.

He came across many sadhus of the Ramakrishna Mission and received his preliminary spiritual instructions from some of them. He studied a few texts on Advaita Vedanta and other systems of Indian philosophy from Swami Tattvamayanandaji and some other sadhus. He was attracted towards the works of Sri Shankaracharya and studied the Bhashyas with great earnestness.  He spent a few years as a Brahmachari of the Ramakrishna Mission, practicing intense spiritual disciplines and offering his services to various philanthropic activities of the Mission. In the meantime, he came across Pujya Swami Dayananda Saraswati, a traditional teacher of Advaita Vedanta.

He joined a three-year course on Vedanta in Arsha Vijnana Gurukulam, Nagpur, and studied Vedanta from Pujya Swami Dayananda Saraswati and Swamini Brahmaprakashananda Saraswati.  Even as a student, he taught Sanskrit and Vedic chanting to other students. He also spent some time in Arsha Vidya Gurukulam, Annaikatti, Coimbatore studying the Upanishads at the feet of Pujya Swamiji. On completion of the course he received the certificate of ‘Vedanta Shastri’ from Kalidasa Sanskrit University.

The Swami spent some time in Rishikesh studying Vedanta from Pujya Swami Dayananda Saraswati and Swami Divyanandaji of Kailas Ashram. He taught Vedanta in Harihar Kailas Jnanpeeth and Jagadguru Sannyas Ashram, Rishikesh for a short period.  While in Rishikesh, he was in close association with many mahatmas and was inspired by their simple and austere life. On the Shivaratri day of 2013, Pujya Swami Dayananda Saraswati initiated him into Sannyasa.

In July 2013, following the behest of his Guru Pujya Swami Dayanandaji, the Swami became a resident Acharya of Arsha Vidya Kendra, Bengaluru. He served the Kendra till February 2018. In March 2018, the Swami moved to a rented house in Sanjaynagar, Bengaluru to start a new centre under the name of Vibhu Foundation. The Swami is also a visiting Acharya at Arsha Vijnana Gurukulam, Nagpur.

At present, besides leading a quiet and contemplative life, the Swami teaches Vedanta and Sanskrit at various parts of Bengaluru. His classes are attended by sincere students of spiritual knowledge. Many spiritual aspirants from all over the world seek spiritual guidance from the Swami.