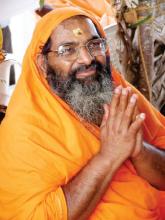 Swami Siddhabodhananda has a rich 35 -year history as a teacher of Vedanta and Sanskrit. As a student of Pujya Swami Dayananda Saraswati, Swamiji began teaching Sanskrit while studying Vedanta in Northern California during a three-year Gurukulam-style course Pujya Swamiji conducted from 1979-1982. Swamiji attended this course and soon after began to teach at Pujya Swamiji’s gurukulams as well as serving him in administrative capacities.

In 1974, prior to pursuing his spiritual studies, Swamiji received his MS in Electrical Engineering from Stanford University, USA and worked for National Semiconductor in Silicon Valley, USA for 10 years.

In addition to unfolding the vision of Vedanta through the Bhagavad Gita and Upanisads with Sankara Bhasyam for the long term Vedanta course students in Anaikatti, Swamiji conducted several three and six month residential courses for those unable to attend the longer course. Throughout his time at Anaikatti, he also taught a number of short Vedanta texts such as Atma Bodha, Tattva Bodha and Viveka Cudamani.

Swamiji’s scholarship and mastery of Paniniyan Sanskrit Grammar allowed him to create the pedagogy and structural tools for the 3.5 year residential Vedanta Courses in Arsha Vidya. Inspired by Swamiji’s clarity and mastery of Vedanta and Sanskrit, many of his students have dedicated their lives to sharing this sacred knowledge. They continue the guru-sisya lineage in teaching Sankara-bhasyam, the scholastic commentary of Adi Sankara on the Upanisads, Bhagavad Gita and Brahma Sutras.

In addition, Swamiji spearheaded the AIM for Seva movement in its early stages for 7 years at Anaikatti, creating the frameworks for programmes on Women’s Empowerment, Balavadi, Hostels for Children and a Charity hospital for the Adivasis of Anaikatti Hills.

In 2006, Swamiji chose to live a life of Ekantam (solitude) and continues to inspire Purna Vidya Foundation’s activities as the silent spiritual head of the Trust.