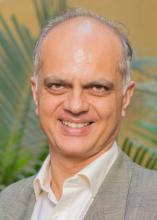 Surya Tahora was born in Madagascar, a former French colony located in Indian Ocean. At the age of 10, he moved to Paris for his studies and completed a Doctorate in Pharmaceutical Sciences for the Industry from Paris University (1987) and a MBA from IAE Aix-Marseille School of Management, France (1988) .  He has also attended an intensive Executive Management Program at INSEAD School of Management, Fontainebleau, France (1993).  He worked for 12 years in multinational companies in international sales and marketing, strategic planning both in Paris (SYNTHELABO-L’OREAL Group, Medical Division) and Bangkok (AIR FRANCE Asia Pacific).

In 1995 he met Swami Dayananda Saraswati, a contemporary teacher of Non Duality (Advaita Vedanta) in the tradition of the Indian philosopher Shankaracarya. Since then, Surya has been studying with him the main ancient texts of the Indian philosophical tradition in their original Sanskrit version. He attended several short term and long term courses conducted by Swamiji at Coimbatore and Rishikesh, two of his major institutions of learning.

From 2007 onwards Surya has been conducting with his wife Neema Majmudar seminars, intensive retreats and giving public talks on Non Duality in India, Europe, etc. He created a bilingual website in French and English called Vedanta, Being alive to what is, which explains in a lucid style the vision of the traditional teaching of Advaita Vedanta with numerous links to articles, blogs and videos of their talks.

He has also translated into French several books of Swami Dayananda Saraswati, namely The Bhagavad Gita Home Study; Mundaka Upanishad; Kena Upanishad; Value of Values; Introduction to Vedanta: The fundamental Problem; Morning Meditations and Prayers. Several of these books have now been published and are available for French audience. Finally, Surya has co-written and published in 2012 with Neema a book on the relevance of the teaching of Bhagavad Gita for our time, Living the vision of Oneness, Exploring realities and growing as an individual.

Since 2014, he is a Professor at SPJIMR (SP Jain Institute of Management and Research), Mumbai, India . He is teaching around six hundred MBA and Executive MBA students per year and conducting workshops for organizations in India, Europe and Asia.  In his classes and workshops, he is bringing together Eastern Wisdom Traditions, Meditative Practices, Cognitive Neurosciences, Ethics and Personal Development, and their applications to the domain of Leadership. Surya’s commitment is to share insights, practices and frameworks to enhance the leaders’ personal and professional lives.  His passion is to accompany them to become more lucid, dynamic and responsible in an increasingly interconnected and complex world.