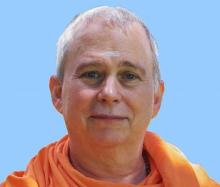 Swami Tadatmananda is the founder and resident teacher of Arsha Bodha Center. From 1981 onwards, he studied in the U.S. and India under Pujya Swami Dayananda. He attended a three-year residential course in Vedanta and Sanskrit taught by Pujya Swamiji at Arsha Vidya Gurukulam (Saylorsburg) in 1987-1989 and later served as the Gurukulam's manager. After Pujya Swamiji initiated him into sannyasa in 1993, he taught at the Gurukulam and around the country until establishing his ashram, Arsha Bodha Center, in 2000.

Swami Tadatmananda is a scholar of Sanskrit and former computer engineer. His background allows him to draw upon contemporary scientific and psychological insights while unfolding sacred Sanskrit scriptures. He thus endows the spiritual teachings of ancient India with great relevance and clarity. He has authored several books and CDs including "Roar of the Ganges" and "Meditation: A Journey of Discovery."

His teachings are full of warmth and humor; his style is informal and personal. He relates easily to all, including teenagers and children who love to sing bhajans to his guitar accompaniment.