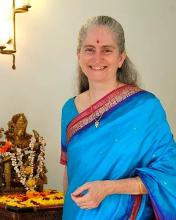 Gloria Arieira is the founder and director of Vidya Mandir.

In January 1974 she went to India to study with Pujya Swami Dayananda ji, who became her master. With Pujya Swamiji she studied until July of 1978, returning then to Brazil.

In addition to staying at the Ashram, a place of study and experience with the master in Mumbai and Rishikesh in India, she traveled to various places following Swami Dayananda in courses, lectures and visits to sacred places.

Since her return, she has been teaching Vedanta and Sanskrit in Rio de Janeiro and other cities in Brazil and also in Oporto, Portugal.

She also dedicates herself to the work of translating into Portuguese the texts in Sanskrit. She is responsible for the publication in Portuguese of Swami Dayananda's books, edited by Vidyamandir Editorial.