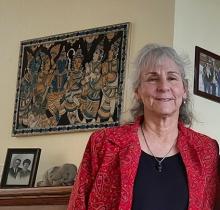 Professor Emerita Ann Berliner, Ph.D., first arrived in India in 1971. While staying at Sivananda Ashram in Rishikesh, she met Pujya Swami Dayananda at Purani Jhadi. She joined the first course at Sandeepany Sadhanalaya, Powai, in 1972. When the course ended three years later, Pujya Swamiji encouraged her to return to the States and “make a life in academics and teach Hinduism at the university level.” After receiving her Doctorate in Comparative Religion and Philosophy from the Graduate Theological Union, in a cross-registration program with the University of California, Berkeley, Dr. Berliner became a Professor and Coordinator of the Religious Studies Program in the Philosophy Department at California State University, Fresno in 1984.  Over the years, she built the Religious Studies major into a strong and viable program where one can study global religions from an objective and academic point of view. The Program now has a committed position in Hindu Studies.

Over the 30+ years of service to CSU, Professor Emerita Berliner, also, served as Chair of the Philosophy Department. She has presented papers at major conferences on Advaita Vedanta. Her translation and commentary on Advaita Makaranda, has been used over the years in various classes. She treasures her deep and valued friendships throughout the community of the sampradaya.