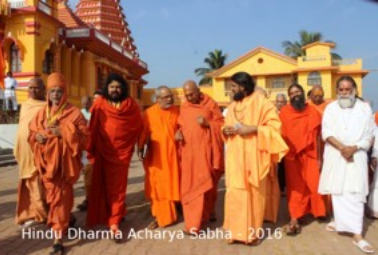 The `Hindu Dharma Acharya Sabha,' (HDAS) an apex body comprising all `acharyas' and `mandaleswars,' was formed in 2003 when it met for the first time in Chennai on December 1 of that year, with the objective of having a coordinated effort on issues concerning Hindus with Swami Dayananda Saraswati, as the convener of the Acharya Sabha.

The 6th convention of Hindu Dharma Acharya Sabha, was held from 19th thru 21st February 2016,at Shri Kshetra Tapobhoomi Goa. Param Pujya Swamiji's Sankalpa and Blessings were evident.It was a fruitfull outcome of the tireless efforts with devotion to Pujya Swamiji and Dharma,done by Pujya Swami Parmatmananda Saraswatiji.