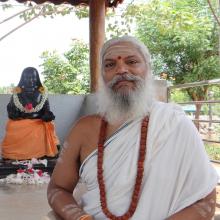 I was born and brought up in Tiruvallikeni, Chennai. I studied up to Higher Secondary in Chennai and then went to IIT-BHU, Varanasi and studied Chemical Engineering. After graduating from College in 1992, I went to Jamshedpur and worked for Tata Steel for one and half years. Then I went to Bay Area in USA in Nov 1993 and worked as Computer Programmer.

In Aug 1994 one of my colleagues asked me to accompany him for a weekend trip to a Gurukulam which was 90 min drive away from New Jersey. I went with him and attended a talk by Pujya Swami-ji on Isvara in one’s life. The way Swami-ji communicated clearly and revealed the nature of Isvara as the one who is manifest as different orders – physical, biological, psychological, moral etc., was impressive. I was instantly attracted to Swamiji’s teachings. I got his books and cassettes and used to listen to them in my car while commuting. Swamiji knew how to use words to communicate complex topics clearly and make it simple to understand. I accepted Swamiji as my Guru and wanted to study with him. I later joined the long term course at Arsha Vidya Gurukulam, Anaikatti in Nov 1995. During the last days of our course Swamiji arranged for my marriage with Srividya who also was a student in the course. In Nov 1998 we were married in the presence of Pujya Swamiji in Chennai. After that I started working in a Software company in Chennai and started teaching Sanskrit and Vedanta to interested people in Chennai.

In the year 2000 Pujya Swamiji started All India Movement (AIM) for Seva. He asked all his students to do seva work under the AIM for Seva banner in their respective communities. My wife and I started to do seva work in Kovalam, a coastal village and Illalur, an agricultural village near Chennai. We used to conduct weekly children’s classes and did some rain water harvesting projects. We also organized some medical camps occasionally. In 2004 Pujya Swamiji wanted me to quit my job and work full time for AIM for Seva. I agreed and then Swamiji sent me as the AIM for Seva representative to Pan Asia Pacific Youth Leadership Summit organized by UN at Hiroshima.

The tsunami in December 2004 suddenly changed everything. We immediately started Tsunami relief work at Kovalam village. AIM for Seva did lots of Tsunami Relief and Rehabilitation work. We built nearly 100 boats, two Schools, two Students’ Homes and ten water desalination plants. I started working full time for AIM for Seva from the day of Tsunami. I shifted the AIM for Seva head office to Chennai and set it up.

Free Students’ Home was the flagship project of AIM for Seva. Pujya Swamiji had a goal of building at least one student home in each district of India. Swamiji made me the Joint Secretary of AIM for Seva and asked me to take care of the day to day administration. The next two and half years were very memorable. I travelled all over India from Karnaprayag in Uttarakhand to Kanyakumari in Tamil Nadu to set up Students’ Homes. During this period, we setup nearly fifty Free Students’ Homes (Chaatraalayaas) and a few hospitals.

Pujya Swamiji asked me and Kalyankumar, who also studied with me in IIT-BHU and later in AVG, Anaikatti, to buy some land in a rural area and build a Gurukulam around 2010. But we did not do anything as we thought it will be a monumental task. But when in 2015 Swamiji was not keeping good health we decided to do as he had wanted. In May 2015 we met Swamiji in Anaikkatti and told about our plans to construct a Gurukulam near my ancestral village Kallidaikurichi, which is also the ancestral village of Kalyankumar’s father in law. On hearing this Pujya Swamiji was very happy and immediately gave a copy of Sruti Seva Trust deed (the trust that built and manages AVG, Anaikkatti) and asked us to form a trust and model our objects similarly.

We are planning to build a Gurukulam with rooms, lecture hall, kitchen and dining facilities for 50 people to stay and study. We have finalized the master plan and will be starting the construction soon. Once we have the infrastructure in place, we plan to have weekend camps, short-term courses and long-term residential courses for interested people. We plan to teach Vedanta and Sanskrit primarily for adults but also plan to have yoga camps, children’s camps and youth camps. As of now we are conducting online classes on Vedanta, Sanskrit and chanting.